We conceive today’s city as a fragmented traditional city, broken by modernism and superglued by postmodernism into a (in)human space. With this in mind, a question rises above all these streets, buildings, lights and smells: who’s city is this, to whom does it belong if it was built for human, but lost that ambition on the way?

Anthropomorphological principles have long been forgotten, and with the development of technology and political circumstances of a given space, two cities can never be completely the same. Not only because of it’s geomorphology, but also because of their particular genesis through which they passed. Every city is a unique space that is to be discovered. One of the ways to experience the city is through walking. Many tourists will notice when they arrive in a new city that they experience it fully only if they get lost in it and find the way back on their own, occasionally remembering some random things such as a neon commercial sign, or an unusual garbage can, a road that resembles a road from their home town, et cetera. These elements will later be used as markings and meeting spots because they are easy to locate. One of the mysteries is why one place is more memorable than the other (speaking in terms of regular places without landmarks).

Walking can serve as a powerful tool for getting to know the city as well as it’s classification – whether it is a city on the human scale; suitable for use and safe, or is it unhealthy; a labyrinth where it’s hard to find anything. Numerous projects designed to get to know and experience the city through walking took place at different times, but with the same idea.

Among them, there were the more extreme ones like Caleb Smith’s, whose famous “New York City Walk” is now a cult with anniversary that is anually celebrated.

Caleb Smith, and even 50 years before him Thomas J. Keane, had the idea of how each New York block should be visited and documented, which Smith did, even with personal comments for each experience he had. Although this was a very subjective process that took him years to finish, it is motivated by his love for the city, and although there may not be an official scientific conclusion that could be used for academic purposes, this project left behind an idea of getting to know the city through all its pores. In order for such data to be processed it would take a huge amount of time, but certainly it would be interesting to see the outcome, or at least the mental maps* that would originate from them.

*A mental map is a map created on the memory of a certain part of the city that displays those remembered parts, although it doesn’t necessarily have to be from a place visited and it may be a product of imagination based on external data input.

One more interesting approach of walking through a city is the PsyGeo Confux conference and festival that took place in New York in 2003 and 2004. Dealing with current art and social research in psychoanalysis, artists from various fields participated in order to explore the psychological landscape of a city through documentation, workshops and city excursions. Many projects included digital mapping.
Odin Cappello’s psychogeographically inspired project “Navigazing” instructions state that the city is filled with “narrative artifacts, points of visual, or aural interest that suggest the existence of a story, either real or fiction.” His approach to the theory of dérive, which was introduced at the very beginning of OUTLINE, included sending participants into the city with cards and chalk to view and share the aesthetic experience of framing.

There are also groups that believe that walking alone doesn’t show enough efficacy in achieving goals, so they decided that the walk should have a higher purpose. The Italian group Stalker show an attempt to provoke and reclaim space, and to emphasize excessively imposed authority and the constant institutional appropriation of public urban spaces. As a result, they present walks turned into performances, forbidden sleepovers in public spaces, as well as entering restricted areas all around Rome.

According to Kevin Lynch, people understand cities through elements that they can recognize. This gives them emotional security and space knowledge. But if some areas of the city lost the sense of safety because of an authority restriction, or fit here are oceans of parked cars, isn’t it the citizen’s right to claim the space back?

Thus, some areas managed to pass through micro-urban interventions and they were returned to the user. Specific examples can be found int he work of Gehl People, which is usually a city-centered living room, or a playground in Copenhagen (KaBoOOM!’s Play Everywhere Challenge). This way you can have a never ending walk through the city, where the apartment, shopping mall or grocery store is just a stop you have to make.

However, it’s not always interventions that we need. Certainly, after taking in consideration that a walk is enough to better understand the city, then we can also go deeper and try to understand what it is that makes a place comfortable enough to be inviting for various people.

As such, a smaller place is recognized in Tuzla, Bosnia and Herzegovina.

In the picture you see a cube. The building near by is called Jupiter, so the cube itself is called “Cube on Jupiter”, and it is actually an entrance to an atomic shelter (or at least so says the urban legend) that would serve the occupants of the mentioned building. It is so popular amongst young people, especially skaters, that it even has a Facebook fan page, which also indicates the many events happening there (genius loci in a box).

This space is important because it’s got its own digital mental map out of a personal need of a group of people, and later it has become a cult venue for dating, playing songs or just hanging around. It serves as a landmark. It is also important because this cube, as well as numerous other cubes, lamps, shelters and posts, is actually the potential of re-activating urban culture as well as expressing the need for public urban spaces and re-assimilating or reclaiming them.

As we have seen, methods of approaching the city are diverse, but what appears as a phenomenon is that the user of the city doesn’t have to intervene with the physical structure or visual identity to recognize places with the potential to become a part of the cities mental map.

What is your cities cube? 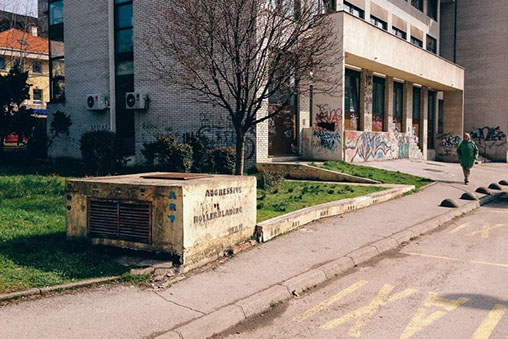 Selma Dokora (1989) is an architect who just received her Master’s Degree in Architecture. Her main subject was building in an architecturally specific urban environment, where she analyzed the relationship of an urban space with its genius loci and the impact of a new interpolated building in that environment. She currently works and lives in Sarajevo.