Slimapocalypse – The Adventures of BG and TG is a feminist twist on the classical superhero story, turning into a musical tinted with erotica, which premiered at Perdu as part of Amsterdam Fringe Festival in 2021. We asked its creators Nadja Henß and Hanna Monola to share bits, pieces and outtakes.

The superheroines 3 Boobs Girl and Tarantula Girl get a call that something is seriously wrong on Planet Earth. A mysterious slime is spreading in Amsterdam city, killing people by sexing them to death! Together they set off on a mission to save the earthlings. 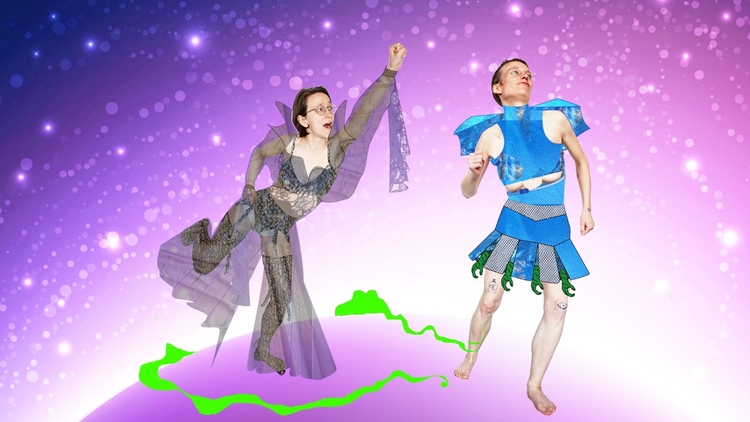 SCENE 2: It has to do with sex!
investigations and plan

Narrator: Meanwhile Tarantula Girl and 3 Boobs Girl were working on a plan. How could they stop all of this slime from spreading? Tarantula Girl was putting her arms and legs on the ground to sense the vibrations of the city. Her hairs were hypersensitive. To get the most accurate result she would never shave. Her Tarantula mother forbid it to her.

TG: I sense something moving at Nieuwmarkt. No time to lose BG! Go with your pump and suck that slime out!
BG: That’s why I have my 6 toes baby, to run fast and save lives…
BG runs away in the back of the stage
TG investigating the persons on the floor

TG: There’s semen all over him. Ugh, and so much of this yucky slime again. It’s covering his mouth, looks like he choked on it. Just like the other tourists. But the penis is still erect!
BG: That must have been a great orgasm.
TG: So now he’s dead but he had an orgasm right before? I don’t get it.
BG: I think I heard once that with suffocation an orgasm can even get stronger?
TG: That sounds like a deathly way to climax.
BG: Do you think the suffocation is related to the goo?
TG: Hm… I would guess so, this slime seems very eager to get into every hole.
BG: Look, the slime is moving! It’s mixing with the semen!
TG: Huuuh…? It’s expanding!… Wait, I see something in there… it’s alive!
BG: Hey, watch out, this slimy tentacle is reaching for you!
TG: Let’s get out of here

SCENE 4: In their headquarter
BG and TG discuss and reflect (turning point)

Narrator: The next morning, TG was sitting at BG’s bed.

BG in bathing robes, chilling on chairs, TG with cup in her hands
Narrator climbs secretly into bathtub from behind, as BG and TG are talking

TG: Wow, this slime must be crazy strong. You’re the most disciplined and in control person that I know. Plus, you’re a super heroine! How could this “thing” befuddle you so quickly?! It almost killed you in like 5 minutes.
BG: I don’t know girl, it totally seduced me. I surrendered to it without even trying to fight.
TG: Do you mean like it was hypnotising you?
BG: I don’t even know how to describe this sensation. I felt my body like never before, all the way from my 3 nipples to my vivi… I never had an orgasm before but I think I was close to it. And it was pretty good.
TG: Hm, okay. Are you sure it was, what you called it, an “orgasm”? When you’re near death you can imagine all sorts of crazy stuff. Maybe you were just hallucinating, that’s what it looked like to me…
BG: No, it wasn’t visual… Actually, it was a full body experience. I can’t explain it, you wouldn’t understand anyway.
TG: But what is there to understand, you nearly died!
BG: Yea I know… But the feeling was so strong, and it made me very happy. And it didn’t feel wrong.
TG: But how can you say that! You almost died and now you say that it made you happy? Why, just because you felt some tingles in your nipples?
BG: Well no, I mean… It’s just… Maybe this slime isn’t all bad?
TG: Are you kidding me? Maybe you need to focus on the mission instead of ‘feeling pleasure’! Exercise and discipline will get you functioning again.
BG: Listen to yourself. Don’t you think there’s more to life than running around the galaxies in a tight costume and saving different species from extinction? When do we ever get a break. To relax? When was the last time you had a vacation TG? Did you ever, even?
TG: (stiffly) No. I never had one and I don’t need one. I was born like this, to fight for the honour of life and all living creatures.
BG: Ya, I understand, but I mean, we never talk about these things… didn’t you ever fantasise about… you know… sex? With another life form? What it would be like to do it?
TG: Nope. I don’t have time for fantasies. And neither should you, if you want to fulfil the quest.

BG: O slime, we stand before you as a unity of our forces! Tarantula Girl with her furry super-sensory legs, and me 3 Boobs Girl, with my milky soft containers! I dare you to come out of your tomb and speak to us! I call for revenge!
(pause)
Slime:
You have tricked me. You snared and cheated me… I’m lying in this tomb, weak, at your mercy, O mighty Superheroines.
So lonely on my planet. 100 000 years of solitude, locked in another tomb…
It seems to be my fate. I just wanted to feel a warm embrace… I just wanted to be… touched!
TG: What is it saying?
BG: I don’t know, it sounds like a lot of emotional mumbo-jumbo to me? It seems confused, actually, is it crying?
TG: Hm, I wouldn’t trust that.
BG: Yeah, but maybe it’s having second thoughts. It actually seems a bit sad, this big blob.
TG (taking a step closer): Slime! Come out of your tomb and face us! We’re ready to fight you! A threat like you mustn’t exist in the galaxies!
Slime: It’s always the same with you mammals! You don’t like me for real! We gave you the best orgasm you couldn’t even dream of having! And what do we get back.. You try to demolish us! Because we lick your excrements!
TG: Told you. It hasn’t changed a bit. No you silly monster, it’s because you tried to kill us, and all other life forms with your sexing! I don’t take pity on you, you’re just a whiny sobbing blob in a tomb!

Narrator: The Blob was spreading in the air. There seemed to be no way out of this one for our two heroines. BG closed her eyes, anticipating the moment of death. As the slime blob approached, TG took BG’s hand and squeezed it. She looked at her dear friend. Would this be the end for them? Could it be, really?
TG looking frightened

LOVE RAP
TG: Actually, I have something I wanna say
Shout out, to my dear friend BG
(Miss BG)
You were always there for me when I needed you (the most)
Yeah, don’t you know my feelings for you are truue
(Don’t end up being the slime’s new host!)
Yeah, yeah yeah yeah…

Girl, with your sexy boobs, beautiful toes
At night I dream of burying my head in those
Milky containers so soft and juicy
Wanna squeeze them all: one, two and three
I fantasize about your breasts all day long
the colour of your nipples made me write this song

BG: I have to admit, I’ve been watching you when you run
Your dark hairs moving in the breeze and in the morning sun
Wanted to reach out and stroke them so much
I’m telling you girl, those hairs of yours really drive me nuts

TG: I’m 3046 years old but
Every time I look into your eyes I feel like new
I don’t know much about sex but I think I could learn with you

CHORUS together:
You are my best friend
And maybe more
Quite frankly speaking
I’d love to be your whore
Dress me in chains, Tell me what to do, boss me round the house
Put your lovely tongue on the inner circles of my mouse

Hanna and Nadja met while studying at the Gerrit Rietveld Academie in 2016. Since then an exchange and collaboration started. With the premiere of “Slimapocalypse” Hanna and Nadja are very excited to announce the starting point of their artistic duo Skunk Kinder.

Hanna is a performer and writer dealing with topics such as gender, sexuality and the body. Her performances, which are scripted and staged, often revolve around old clichés and stereotypes. An interest in fairytales and symbolism also frequently recurs in her pieces.

Nadja is a video and sound artist, with a great interest in curating and working collectively. In her videos, images and sound installations she twists normative narratives to question the constructed perceptions by society. Her works are often text based and aim to create universes in which the human’s superiority is questioned.